Each week, groups of survivors of the Holocaust join Helping Hand Coalition at the HHC Caesarea Villa. While it takes time for some groups to allow their walls to come down, others arrive at the Villa with their arms open and feeling excited about the afternoon’s activities. This week, twenty survivors from Kiryat Haim joined Helping Hand Coalition for a concert event, and the celebrations began as soon as they stepped off the bus! It was a joyful Shalom House event that put a smile on everyone’s faces!

Bozena Gasiorowski, director of the Shalom House Project, welcomed the survivors from the Association of Immigrants to the Villa and exclaimed how happy she was to meet the group for the first time. After introducing the performers of the afternoon, Bozena gave the stage to Alyosha and Jody Ryabinov, who began the concert with a story about their journey to Israel.

Dagi was the first to perform for the survivors. Tambourine in hand, she swept across the Villa’s floor with joy shining on her face.

Alyosha followed her dance by performing an original composition he’d written after visiting the Jordan River for the first time. As he played the piano, Dagi brought the river to life as she danced with blue flags, directing them to flow in rhythmic movements. At the end of their performance, Ilana, the leader of the group, said that she could hear and feel the Jordan River through the music and dance. Her comment was followed by a round of applause from the audience.

Throughout the concert, a hush fell over the Villa as the audience watched, no one daring to make a sound in case they burst the musical bubble that had surrounded them.

Before Claudia played a piece of inspired music, she shared with the group what it was like for her German family during the war.

Claudia’s grandfather had been entirely against Hitler’s Regime and refused to submit to the rules. Hairdressers by profession, Claudia’s grandparents would use the cover of the night to visit their Jewish neighbors to cut their hair when they were no longer permitted to come to the salon. One day, a German customer warned Claudia’s grandfather that her husband, an SS officer, had seen his name written on a list of people to be sent to a concentration camp, but this didn’t sway him. Despite the warning, Claudia’s family continued to serve the Jews and listen to their secret radio, which broadcasted news from France and England.

Raised in an anti-Nazi home, Claudia was taught from a young age that to be blessed she must bless the Jewish people and Israel; so, as Claudia took her seat in front of the piano, she said, “Let me play for you and be a blessing to you.”

Ending the concert on a high note, Jody joined Alyosha to sing a few well-known Hebrew songs for the survivors. Inviting the guests to dance, a joyful noise filled the Villa as the survivors and guests danced around the room,  singing along to the songs and smiling enthusiastically.

Three survivors, inspired by the concert and Claudia’s testimony, volunteered to share a small part of their story before lunch was served. Now ninety-two years old, Ida Vasilieva was twelve years old when the war began. Though she has many stories, the one that stands out to her took place when her family was evacuated on by ship.

Their voyage lasted for three days, and one day, a German plane attempted to drop a bomb on the ship. Flying low, Ida can recall looking into the pilot’s eyes as she stood on the deck of the ship. In a moment of fury, she’d shouted to the German, “You are an animal! If you hit us with a bomb, I will take your nose from your face.” The German seeming to have seen Ida’s anger threw back his head and laughed before flying away.

“Do good in life. Be Happy. And be one with God.” ~ Ida Vasilieva

Nadia Kravchenko, a descendant of those who were in Leningrad during the siege, recited a Russian poem called Sun, Pines, Silence which was written by Nadink (Солнце, сосны, тишина by Надинк) and spoke about the siege.

Lastly, Michael Resnik shared about joining the Resistance after being locked away in a ghetto. A young teen, Michael used his grandparent’s gold coins to buy guns and grenades from the policemen. After successfully fleeing the ghetto, Michael, with sixteen other people, hid in the depths of the forest before joining the Partisans. When they were safe, they learned the terrible news that the ghetto had been burned, with the Jews still locked inside.

As lunch began, Ilana Katz thanked Helping Hand Coalition for the wonderful afternoon that had been prepared for her group. In unison, the group joined Ilana and said, “Thank you very much,” in English.

Once everyone had thoroughly enjoyed the delightful lunch prepared by HHC’s volunteers, Jola and Donna Brancart, the survivors gathered around the piano to sing along to Hava Nagila as Alyosha played the famous tune. The singing proceeded as a group picture was taken, and the group left the Villa to stand on the sidewalk to wait for their bus. No one wanted the party to end and continued until the bus’ door was closed, and the wonderful group from Kiryat Haim drove away!

Thank you to all who took part in this event: the Association of Immigrants, your love and joy was contagious. Alyosha, Jody, Dagi, and Claudia, each week that you come to perform for the survivors, our hearts swell with love and gratefulness. Jola, you are an incredible woman who works tirelessly to ensure that everything gets done correctly. And, Donna, it was lovely having you at the Villa, thank you for sharing a song with us and participating with this event!

Are you coming to Israel with a group? Helping Hand Coalition invites you to host a Shalom House event and bless the survivors of the Holocaust, during your trip! Click here to learn more! 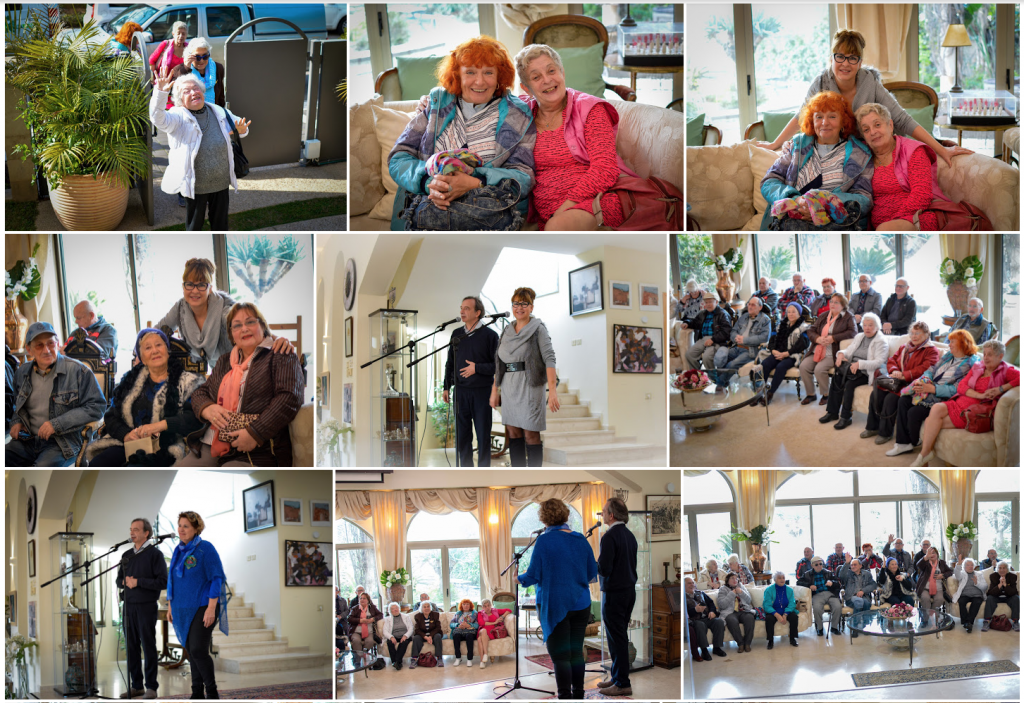 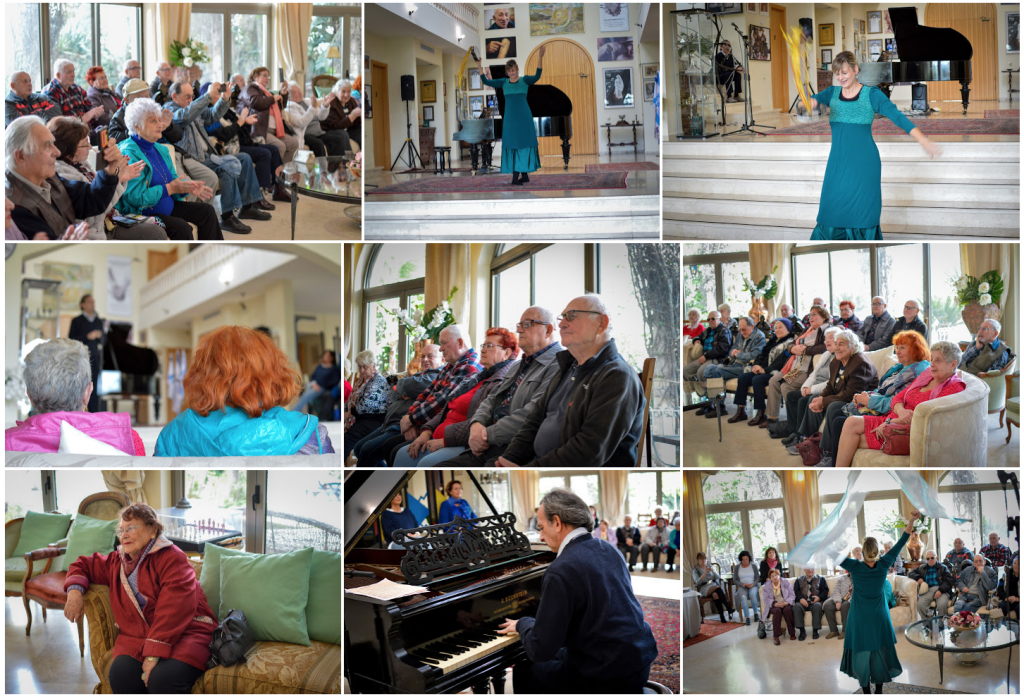 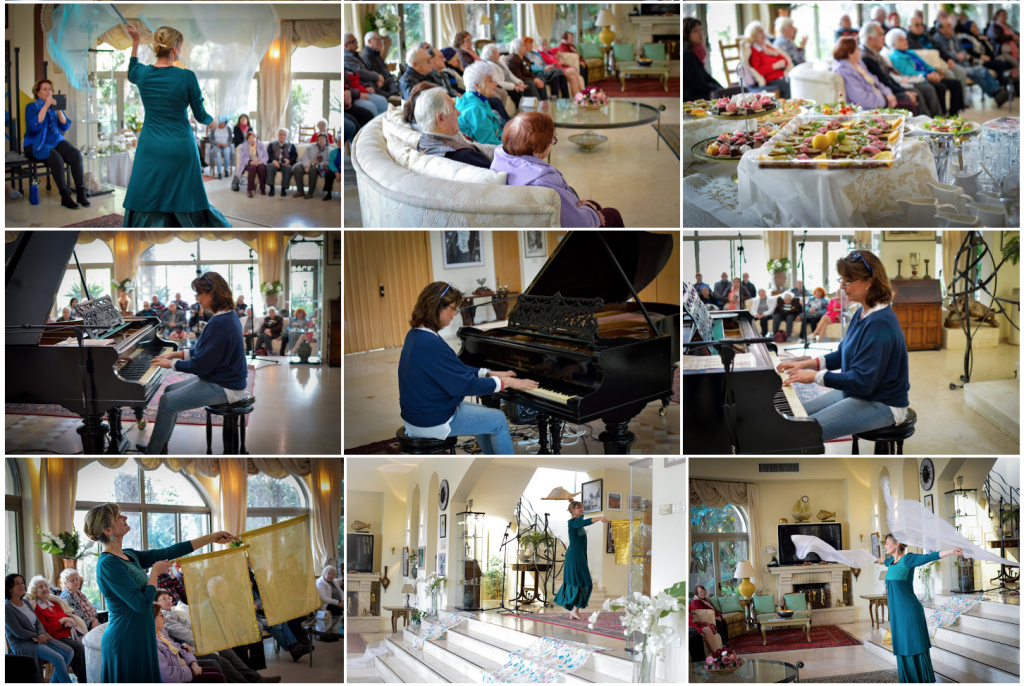 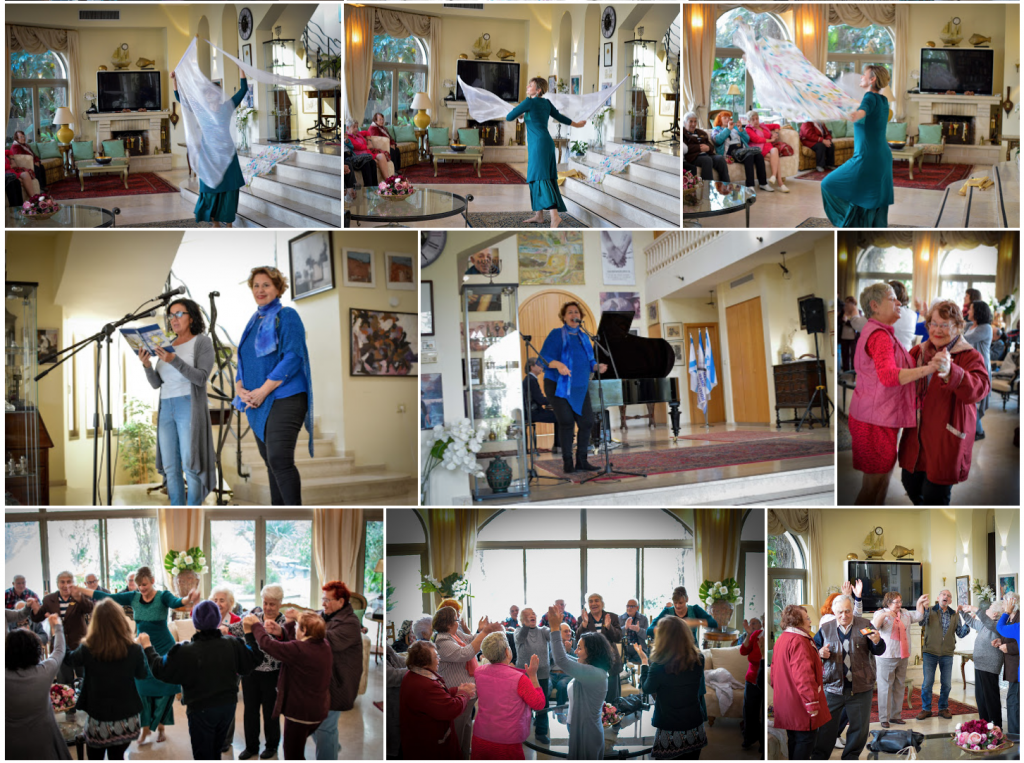 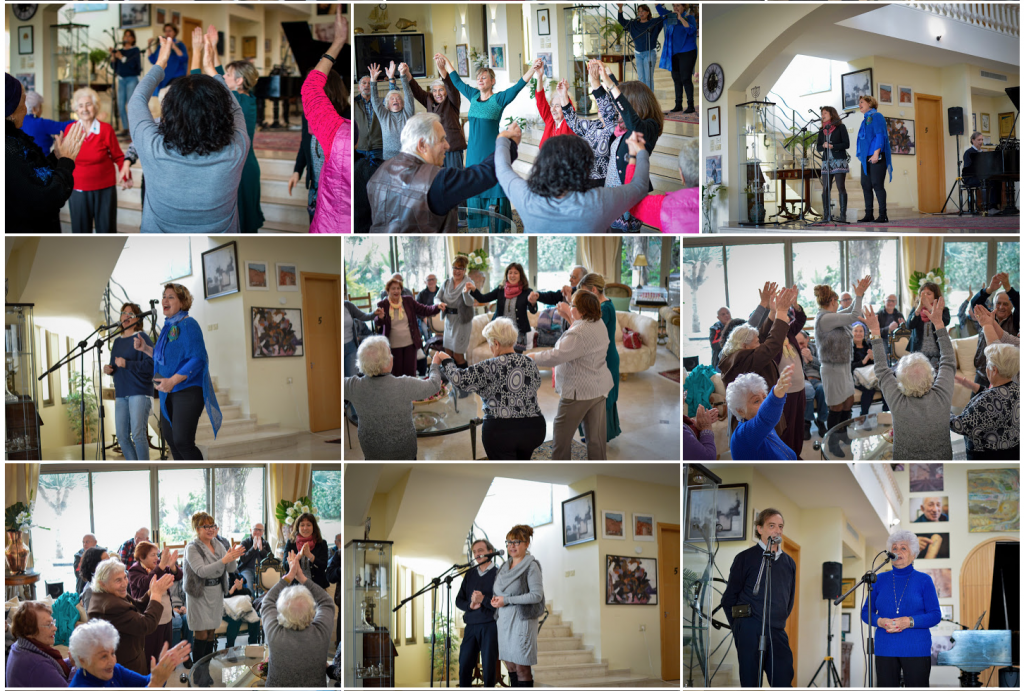 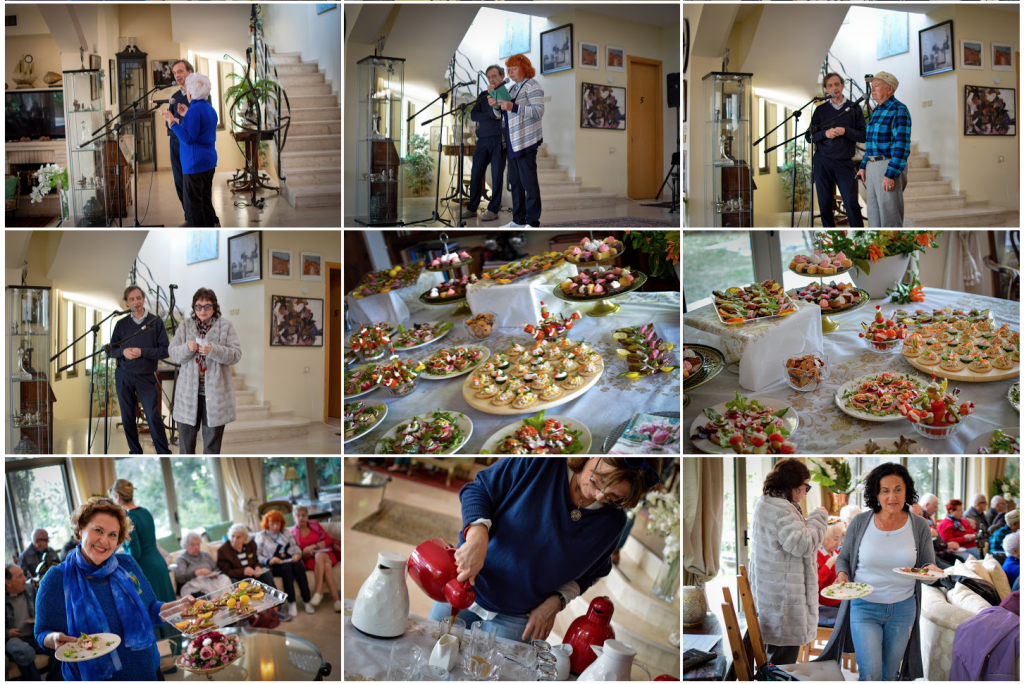 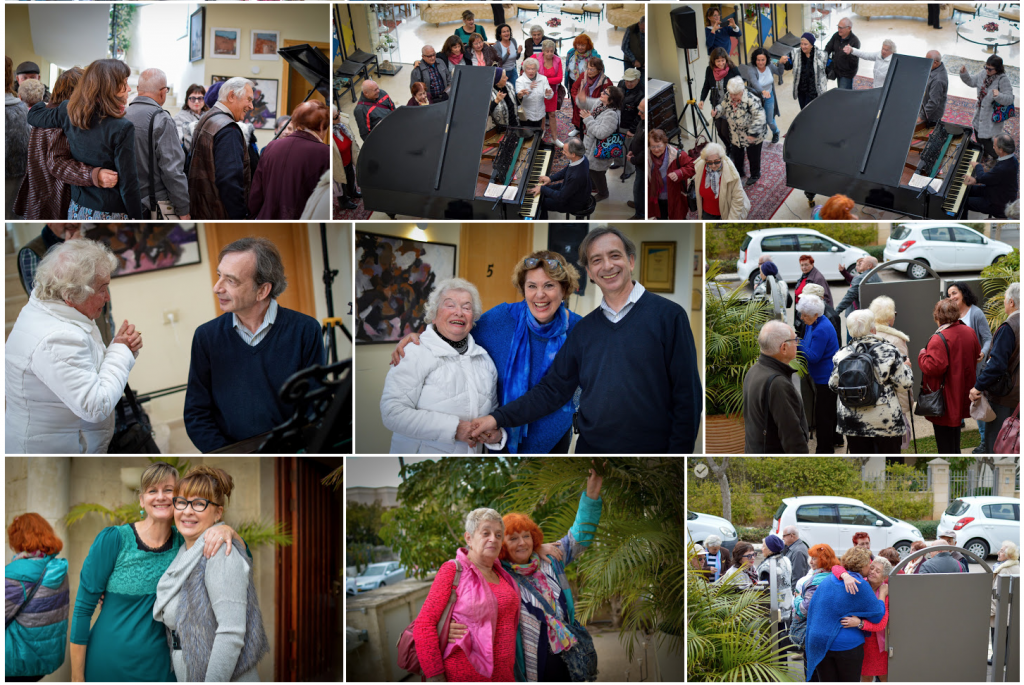